Since 2014 there is a new soaring competition for all juniors in Europe, which attrackts with an awesome prize: 8 days habitation in Bitterwasser (Namibia), including flights, glider, board and lodge for free! The price is sponsored by Bitterwasser Lodge & Flying Centre.

Bitterwasser Cup takes two years (first time 2014 and 2015) and includes the best 6 flights scored with OLC-Plus rules. Here it is important to fly the maximum distance on one day, which ideally follows a rectangle, to get the most points. The type of glider has no important affect to the scoring, because every glider has an index (e.g. Std. Libelle: 0,98 and Nimbus 4: 1,24). So you have to fly a much longer distance with the Nimbus 4 than Std. Libelle to get the same result.

In the two years 2014 and 2015, I managed to fly at the days with the best weather conditions.

To win the Bitterwasser Cup, you need to:

At the end of season 2015 it was a match between Robert Schymala and me, who had the best opportunities to win. You will find the complete results here: http://www.onlinecontest.org/olc-2.0/gliding/bitterwasserCup.html?st=olc-fai&rt=olc&sp=2015

So finally I was the lucky guy, who won the first Bitterwasser Cup and was invited to stay from 22nd of December 2015 to 1st of January at the Bitterwasser Lodge in Namibia.

In the night from 21st and 22nd I flew from Frankfurt am Main (Germany) to Windhuk (Namibia), which was my first intercontinental flight so far.

Early in the morning of 22nd of December I arrived at Windhuk airport, changed some Euros into Namibian dollars and found my driver, who drove me from Windhuk to Bitterwasser. It is a longer drive through an interesting landscape. The 3 hour trip started on „normal“ tarred roads and continued on big gravel roads.

Gravel road on the way to Bitterwasser

At about 11 o´clock I arrived at the gliders paradise: Bitterwasser Lodge & Flying Center. What a wonderful location in the middle of Kalahari: My lodging: a rondavel

I was accomodated in the first rondavel in the picture obove. It´s not luxury, but with a bed, some taproom and a desk entirely sufficient to sleep. After I put my luggage into the rondavel, I went to the restaurant and said hello to each other. Because the gliding weather was not too good (blue thermals), most of the people made a rest day with the perspective of great weather on the next day. Incredible sunset on my first evening at the Bitterwasser Lodge! My glider for the next day: Ventus 2cxm „C“ 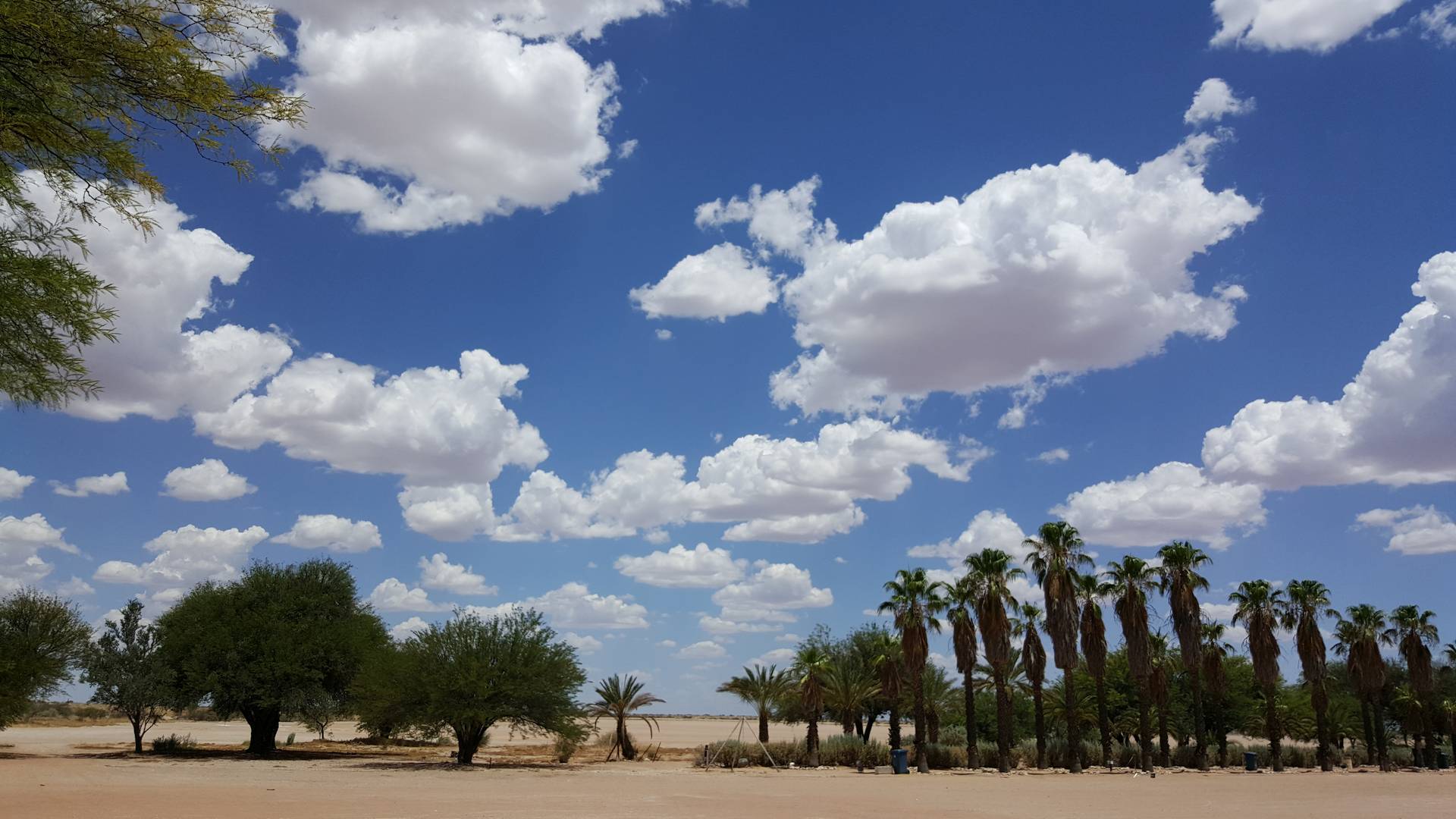 Dust storm in the afternoon, which was very impressive.

My first flight acclimate into the glider and the new landscape. On the upper left corner of the picture, you can see a thunderstorm with rain.

Blue sky to the east and a vast fiew over Namibia.

Some flat cumulus clouds and interesting mountains, but no good place for outlanding. Simon Schroeder (left) and me on a 60 km trip through Namibia to join a game drive.

After an intensive search we found some giraffe.

An ostrich in the pan. Rain in the background, so it was a good decision to stay on the ground for this day.

The next thunderstorm is coming with a surgee line…

… and afterwards water is on the pan where usually the gliders are launched.

An other game drive, this time at the Bitterwasser lodge.

Finally weather for soaring on my next to last potential flying day. Weather is ok, but not perfect.

Rain at the border to South-Africa, but still good climbs. To obtain more than 1000 kilometers, I had to fly some more to the south.

Great big cumulus clouds on the return path. Under this cloud I climbed with more than 7 m/s – better than an elevator. This was my idea of Namibia!

Spread out clouds made the way back home really difficult. But at the end I arrived in 500 m above Bitterwass with a flown distance of 1076 km. Very happy – this was my 3rd flight of more than 1000 km (other two in Germany).

You can guess where the sun is. Launch formation in Bitterwasser: every glider is placed next to each other, so that everyone can launch when he want. Awesome!!!

Team flying with Simon Schroeder who won the Young Eagle Speed Cup and was also provided with a Ventus 2cxm.

Some good clouds in front of us, but we have to fly more to the left direction, where were many spread out clouds and nearly no sun on the ground. Still more than 180 km to Bitterwasser.

Again a difficult final glide with the goal in sight, but we still need some more height to reach Bitterwasser. The flight office informed us, that there are gusts with more than 50 km/h on the ground. In the team with Simon we found the saving lift for final glide.

Bye-bye Namibia, it was a great journey!!