Playing with the forces of nature in Namibia

It all began with the Bitterwasser Cup price, which I won for six great OLC flights in 2014 and 2015. This price included a trip to the Bitterwasser Lodge and Flying Centre last year between Christmas and New Year, where I got some inspiration about flying in Namibia. But at this trip I had bad luck with the weather and a crashed glider on Christmas. I only flew three times out of 8 possible days with a Ventus 2cxM and made one flight with more than 1000 km. There was one day, where the weather forecast was rudimentary good enough to try a 1000 km flight, but it was also a tightrope walk between overdevelopements and spread outs. At the end of the day I was really happy about my 1076 km flight with an average speed of nearly 147 km/h and to be back at Bitterwasser without the use of the engine. Some people were not so amused about my long flight, because they thought that thunderstorms will reach Bitterwasser at the early afternoon. I didn´t appreciate the weather to be that critical as they tought and it turned out to be harmless. By the way, at every time of the flight I had alternative landing possibilities and there was no dangerous situation for me or for the glider. That´s my first priority! With this difficult flight I was the leader of the worldwide daily scoring at Onlinecontest. The whole trip gave me a first look into gliding in Namibia and how strong forces of nature can be on other continents. It was a great journey and there was a desire of more!

The next big step were the German Junior Championships in Marpingen this August, where I won in club class with a superior lead of around 150 points and two day victories. Wilfried Großkinsky sponsored a complete trip to Bitterwasser for the winner, but last year we decided together with him, that as much juniors as possible should have the possibility to make the experiences of flying in Namibia. That´s why I got a consolation gift: 500€ or a flight to Bitterwasser. Later this year, Bitterwasser Lodge & Flying Centre announced, that juniors can get a Rondavel (accomodation) for 50% of the usual price and I started thinking about an other trip to Bitterwasser. But it was still a huge amount of money for a student and it took me a lot of thoughts if I should make this trip or not. Especially in consideration to next year where I will participate in the Junior World Gliding Championships and the subsidisation of the “Deutscher Aero Club” is limited. At the end, I made the right decision!

Mid of November I flew with Qatar Airways from Frankfurt via Doha to Windhuek. Have a look at my Vlog #5 where you can get some impressions about the arrival in Bitterwasser.

The habitation at the Bitterwasser Lodge was once again very good and luxury, espcially the food was phenomenal. In 8 of 9 possible flying days, I flew 60 hours, more than 7000 km and my highest altitude was 5500m. Insane!

On one day we had to land about 45 minutes before sunset, not because of missing thermals, but because there was a huge sandstorm arriving at Bitterwasser. In Vlog #6 you can see this natural spectacle.

It was an other awesome journey to Namibia and I had a lot of fun playing with the forces of nature. I made 4 flights with more than 1000 km and at my last day I even made my first triangle with more than 1100 km and 1150 km free flight.

Follow this link to all of my flights: http://www.onlinecontest.org/olc-2.0/gliding/flightbook

What would be possible in Namibia with my Std. Libelle?? 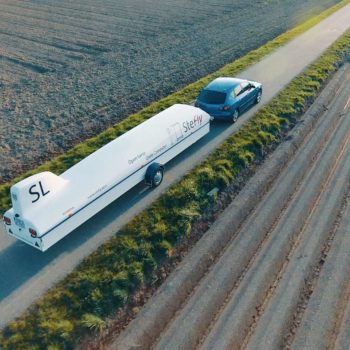